After seeing three dances by Amy Leona Havin in the past few months, I’ve started comparing her to a weaver at a loom. The various threads and colors of her choreography interact and overlap, creating recurring patterns at times and clear juxtapositions at others. Together, they pull together the edges of her dance blanket, connecting her vision to movement and offering a look into the inner workings of her mind.

Havin’s latest work, mekudeshet, is an evening-length dance set on her company, The Holding Project. It follows the recent Milk, which premiered in the Union PDX festival, and Holy Lola, a dance film that premiered at Portland Dance Film Festival. Last weekend, as mekudeshet threaded itself together, it looped in movements and aesthetic choices that recalled Milk and Holy Lola, and it felt like a homecoming.

For Havin, the idea of coming home seems central to her quest as an artist and as a human. The roots of mekudeshet originate in her own family’s history—their Jewish faith, their Isreali homeland, and their resilience and struggle through the trauma of the Holocaust, during which all four of Havin’s grandparents survived the devastation of the concentration camps. The work serves as both a time capsule and a sign for how Havin’s future might weave together the worlds of Judaism and feminism. 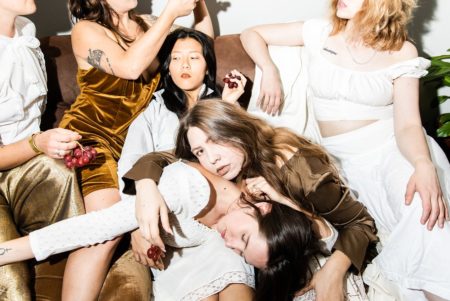 “I feel in a way I have been split with my destiny,” said Havin, describing her dual identity as both a Jewish Israeli and an American. Interlacing her Israeli origins into her work seems to be Havin’s way of grappling with these things, having lived permanently in the US since her teenage years.

Havin has been choreographing since the age of 18 and has created 5 full-length dances, upwards of eight dance films, and various other projects. Her choreographic works, dance films, and installations have been presented both on the West Coast and internationally. The Holding Project, formed in 2015, has been creating thought-provoking live performance, dance for film, and installations. Led by Havin, The Holding Project is rooted in improvisational studies and movement exploration techniques, and encourages collaboration and play within the artistic process.

Set within a rectangular space at Shaking the Tree Theatre, mekudeshet was caged by three boarded walls; on the fourth wall, an audience of about 50 people watched. Two doorways marked the edges on each end of the performance space, and at times the dancers moved in and out of the space like ghosts; one moment present, the next gone.

The word “mekudeshet” itself means “to sanctify something as sacred.” Havin’s mekudeshet focuses on the concept as a choice, what a person can declare sacred for themselves. “It’s an opportunity for my dancers to continually search for the holiness of their connection to the movement,” says Havin.

The Holding Project’s name also comes into play here. We choose what we hold close—time, space, memory, God, relationships— and mekudeshet begins with a hallowing softness, a carving away at the rigidness of the body and of religion, releasing into vulnerability. Varying ideas clash with one another in a way that dissolves their differences into a liquid pool of movement. 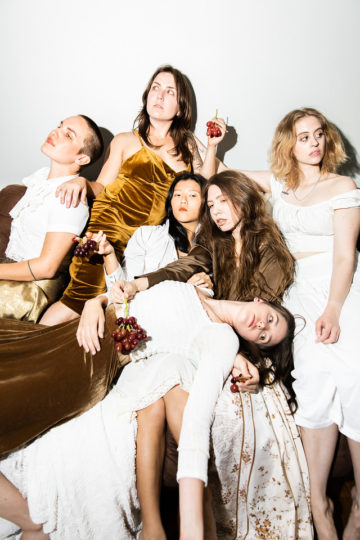 Havin chose to highlight a traditional Hebrew song in the beginning of the dance, Shma Israel, with lyrics that come directly from Deuteronomy, the fifth book of the Torah:  “And you shall love the Lord your God, with all your heart and with all your soul, and with all your might.” While the melodic song played, the all-female cast explored a similar range of scales in their bodies, a radical act to pair with the exploration of religion. The two ideas would continue to co-exist throughout the piece, as Havin’s way of asking who’s to say that powerful femininity and sensuality cannot be claimed as holy within the context of Godly love?

More obvious references to Jewish Israeli culture inform mekudeshet as well. Grapes played a lighthearted part, for example. Havin, who appears occasionally in the dance, performs a solo section in which she travels across the back wall, nailing bunches of grapes into the wall as she goes. In another part, she drags a microphone into the space to amplify the chomping of dancer Annie Leonard, who is ravenously devouring grapes from a wicker basket.

Another part of the score rings with the Song of Solomon and its celebration of sexual intimacy, with a new bride singing, “I am my beloved and my beloved is I.” Havin’s choreography regularly emits a sense of sexual freedom and authentic sensuality that follows from the Song of Solomon. The dancers seemed to get lost in the depth of their movements, eyes traveling about the space as their heads rolled freely with each sensation of motion. This release of tension showed up often in the work, whether it was the space between one movement to the next or the group as a whole as they collapsed into one another at times.

Company dancer Elle Crowley’s solo reminded me of a skipping stone striking a calm lake. Her movements measured and precise, yet pooling out in rings of water that encased her limbs and body. It’s this luxurious choreography that allows the audience to slip into the pleasure of Havin’s work, bringing the viewer closer with each weighed exhalation.

The journey through mekudeshet is a long one, about an hour and a half. A slew of ideas repeat themselves once or twice before the dancers take their final bow. Reoccuring formations, transitions and pacings create a trajectory towards a culmination feels somewhat like the solution to a maze. “Repetition is never the same,” Havin says, “why wouldn’t I let it repeat and expand?” 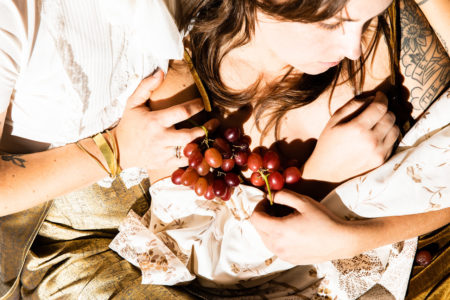 Toward the latter half of the work, some of the repetitions felt redundant, and I wondered if a re-ordering or shortening of the sections could have served the piece’s overall arc. Still, each of the sections of mekudeshet was marked by strong attention to detail, aesthetic clarity, and incredibly powerful dancers.

A collage of solos, duets and large group sections populated the work, with a wide range of gaga-esque movement informing the choreography. For those unfamiliar with gaga, it’s a popular Israeli modern dance style, developed by Ohad Naharin at the Batsheva Dance Company. It is based on the dancer’s internal exploration rather than the external appearance of the movement.

Carly Ostergaard’s performance in particular reflected this experience. As I watched her move in her unique way, I found myself wondering if we’d come to watch her move or if she’d come to watch us while she moved. Her gaze was directed toward the audience in such a way that made us question what the internal narrative of the dancers might be. The curiosity translated into a duet between Ostergaard and Whitney Wilhardt as well, which felt like a climactic part of the mekudeshet: two well-paired, talented dancers sharing the space as one, each with a strong individual voice.

Nearing the end of mekudeshet, a soundscape of swarming airplanes overtook the space, rattling the theater and reproducing that sinking feeling you get when an aircraft is in descent. The first thing that popped into my head was not the obvious political connotation of an air raid, given Havin’s family history. Instead, what came to mind was Havin’s earlier  question: Has she been split from her destiny? Could the sounds of planes instead be referring to the long journey back to her homeland?

If so, mekudeshet was coming full circle, returning itself to its roots, and bringing with it the fullness of a life lived with the radical choice of defining for yourself what is holy.