Portland Tap Company debuts with "The Man Who Forgot"

“Your stories go on, but who are you?” Kelsey Leonard mused as we discussed the history and future of tap dance in a coffee shop last week. Leonard, who founded the Portland Tap Alliance in 2015 with Pamela Allen and Erin Lee, has herself played a role in the story of tap. The Alliance was designed to promote, preserve, and celebrate tap dance in the Pacific Northwest and globally; since its founding, it has produced an annual three-day festival bringing tappers from around the world to Portland. And now Leonard is serving as artistic director and co-choreographer of the Portland Tap Company, a group of seven tappers from Portland, Seattle, and Vancouver, B.C. The brand-new company will make its debut this weekend at the Portland Center for the Performing Arts with a premiere of The Man Who Forgot. 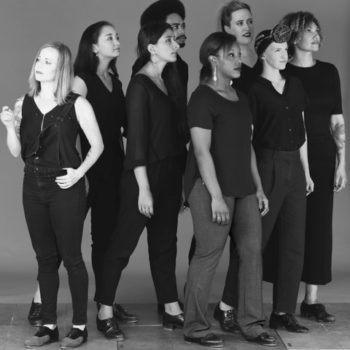 The Portland Tap Company debuts this weekend with “The Man Who Forgot.” Photo by Nicholas Teeuwen

It seemed fitting that Leonard and I were having our conversation in person. Most of tap history lives on through verbal communication in tap classes and festivals across the nation, Leonard explained, adding that it’s normal for tap instructors to emphasize the importance of tap’s influencers by calling on students to speak their names: Bill “Bojangles” Robinson, Jimmy Slyde, Chuck Green, Charles “Honi” Coles. The Man Who Forgot explores the power of memory by evoking those who laid the groundwork for tappers and artists alike today.

The title refers to a recording of short-fiction writer Neil Gaiman’s The Man Who Forgot Ray Bradbury, a 15-minute musing on memory, friendship, and the power of a name that Gaiman gave the Farenheit 451 author for his 91st birthday. The Portland Tap Company program includes excerpts from the recording, integrated into a score created by the Josh Rawlings Trio, in collaboration with Leonard and co-choreographer Jesse Sawyers. The Seattle-based trio, led by Grammy-nominated pianist Josh Rawlings. plays everything from jazz to blues to feel-good pop. Having a score created around the tappers is a luxury, Leonard noted, as is having the group play live at this weekend’s performance.

Leonard and I talked about how tap, much like jazz music, has historically been a form of communication in and of itself. Tap, she noted, has black roots dating back to the 1700s, when West African and Irish indentured servants’ cultures mixed in an uprising against plantation owners. The rhythms of Irish dance footwork and West African drumbeats cross-pollinated, and tap took root. Slaves working on plantations began communicating with one another using rhythmic foot patterns.  Nowadays, in jazz jams and tap classes, the back-and-forth musical and rhythmic exchange still hews to that same alternative form of communication. And as with jazz music, tap’s continuity depends on well-versed artists whose improvisation draws from the masters who created the art form. The Portland Tap Company created The Man Who Forgot with tap’s forebears in mind.

The company’s performers include Leonard and Sawyers themselves, along with Portland’s own Bethany Reisberg, MaKaeyla Pool, and Sarah Brahim, whose work you may have seen in New Expressive Work’s latest residency cycle. Pamela Allen, Funmi Soflola, and Sawyers are based in Seattle, Washington, and Julianna Oke is from Vancouver, B.C.

The Portland Tap Company will trip down memory lane this weekend, using two of America’s strongest cultural staples–tap dance and jazz music–to explore our capacity to remember the past and carry information forward. And, too, the company will capture the fleeting yet magnificent nature of being human.