“Don’t make work or make it work,” said Samuel Hobbs during the talk-back session of the inaugural Union PDX new contemporary dance festival in Portland. He was referring to the two options a choreographer faces in Portland, a city where the dance scene is full of creativity, but low on funding, visibility, and connectedness as a community.

Hobbs and the push/FOLD company he serves as artistic director are working toward solutions for unifying dance artists in town, and their latest idea came to reality this weekend in the form of Union PDX. The festival packed performances, master classes, educational outreach for young dancers, audience talk-backs, and Portland Dance Community Awards all into four days’ time.

When I sat down with Hobbs to chat about what sparked the idea for Union PDX, which ran September 26-29 in the Hampton Opera Center, he reiterated that it’s come from the struggles of being a working artist in a city where two or three big names in dance are thriving. Meanwhile, the rest of the local companies and independent choreographers are all battling for their slice of the funding pie.

Under such limited conditions for artists in the city, with most mid-level companies paying out-of-pocket for rehearsal space, dancers, venue rental, videography, photography, and you-name-it, it seems natural that a lack of unity in the community has arisen due to the stress of an unbalanced system. This all equates to a lack of visibility for the dance community, especially for those artists who can’t keep up with the pay-to-play nature of presenting work here in Portland.

So what gets lost in the mess of it all? The art. So let’s spend the next few paragraphs talking about that.

Hobbs commissioned two choreographers to join him in splitting the Union PDX bill: independent choreographer Carlyn Hudson and The Holding Project’s artistic director, Amy Leona Havin. The four push/FOLD company dancers performed all the dances on the program.  I asked Hobbs if he’d placed any parameters on the commissions, but it turns out the task was simple: create work that challenges you as a choreographer in some way.

For Hudson, that meant establishing herself as a more versatile dance maker: “ I wanted to show that I can have pieces that are more emotional,” she said over coffee. “My past few pieces had lots of comedy in them—this one is a little darker. If I want it a piece to be comedic, I’m sliding downhill. If I want to create a serious piece, I’m going uphill.” When I asked Havin what that meant for her, she succinctly responded, “Isn’t that what we always do as artists?”

For the four company dancers, Hobbs saw the festival as an opportunity to fill in some of the gaps that remained in technique and artistry after several years of training within the parameters of his own technique, Visceral Movement Theory (VMT). It’s a technique that is rooted in the kinesiology of our organs, fusing Hobb’s training in classical ballet and contemporary modern dance with his athletic background.

First up was Hudson with a quartet called A Predisposition that included herself and three of the push/FOLD dancers: Liane Burns, Briley Jozwiak and Holly Shaw. The most striking aspect of the work was immediately in the spotlight—the costume design by Boramie Ann Sao. The dancers arrive into the space one by one, sporting minimal black tulle bulbous dresses that formed a cone around their necks. The spatial pattern continued to shift as if the dancers followed an imaginary maze on the floor. With each rotation, their bodies shifted and settled in to precise variations of one another’s shapes. While the choreography recalled the fluidity of ballet, it was shaped by an almost mechanical technique that carried the dancers in and out of relation to one another.

The majority of the music Hudson chose for the work was deeply religious. The lyrics of the second piece, a motet written by Josef Rheinberger in 1855, translates to “stay with us, for evening falls,” while another piece quoted a Latin excerpt from the Book of Psalms. Though Hudson didn’t mention anything about religious undertones, I couldn’t help but find connection to the music and the methodical, ritualistic procession of dancers as they travelled through space. 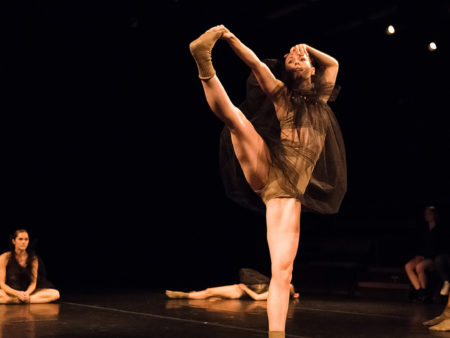 For Hudson, the work was created in response to her “frustration with the cycles of her behavior that aren’t easy to break.” She explained to me that the work was meant to depict four separate parts of a person’s being, demonstrated through each of the four dancers. Perhaps this was why the slight variations in the patterning emerged in the choreography, but the work as a whole seemed to function within its own language, marked by skewed balletic shapes paired with unfamiliar port aux bras. The dancers withheld any sense of narrative in their facial expressions, which remained almost affectless the whole time, adding a layer of mystery to the work that sealed its existence into a rather abstract world of movement and internalized ideas, seemingly unlinked to day-to-day human experience.

After a short pause to transition into Havin’s work, entitled Milk, the three push/FOLD dancers returned to the space alongside their fourth member, Ashley Morton. A tender and wandering solo by Shaw served as the opening to a work that translates as a study on the female experience, with all of its subtleties and disregarded realities. Positioned in a deep squat, Shaw’s initial movements were a syrupy exhale in contrast to the precision of Hudson’s contemporary ballet style. Her body moved in luxurious circles and valleys, indulging in the movement capabilities of her torso.

Havin’s choreography is influenced by her Israeli upbringing and reflects movement exploration concepts rooted in Gaga, the signature technique of Israel’s famous Batsheva company. The dancers’ connection to the work is paramount in Havin’s creation process, and she looks to the dancers to make it their own. “It’s is always meant to be interpreted: If I was interested in them all looking the same, I would just set a solo,” Havin says of her choreography. A certain release is required for fluctuations to occur in the work each night, which is something Havin feels enables her work to be a living entity. As I watched the world of Milk unfold, I saw this spooling occur, particularly in Shaw, whose commitment to exploration and maturity in movement carried impressive weight throughout the piece. Her presence engulfed the group as they worked through Havin’s ideas.

Later in the work, a metronome-like sound ticked rapidly  in rhythm, setting the pace for the dancers, though each of them appeared to still be moving to a more internalized rhythm, unconcerned about the specificity of their body in relation to this metered soundscape. I saw the section as a metaphor for the pace at which women are expected to move through life, with no slack given amidst the growing list of expectations placed on them. Despite the moments of narrative in Milk, Havin was clear during our interview that she likes to leave a lot of space in her work for audience interpretation. Though she mentioned that Milk is a part of a larger ethereal narrative  that she sources inspiration from as an artist, she was unconcerned with her work being interpreted differently that she intends it to be. “In the same way I have a lot of trust for my dancers, I have a lot of trust in myself,” Havin says. 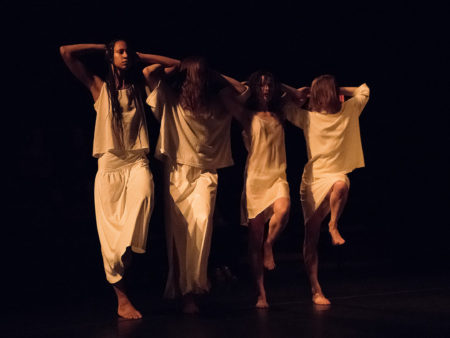 The performance closed with Hobbs’ latest creation, Ash, which came from various artistic elements. One was a poem he’d written. Another was the pairing of spoken word and movement. Hobbs is also a composer and that figured, too. He used a Seaboard—a MIDI controller that has flexible rubber keys rather than a traditional “moving keys,” allowing for a certain type of physicality in digital music creation—that attracted Hobbs as a dancer. Hobbs’ choreographic process for Ash involved a lot of cutting and pasting of these ideas, and the final result was “where everything intersected.” What that turned out to be was a musical score that features Hobbs’ own voice, singing wordlessly in deep tones accompanied by his signature dance style: contemporary movement that requires the attentiveness of ballet technique and emits a visceral reaction in the dancers. In pacing it transforms from a haunting slowness to an agile athleticism that overtakes space with tenacity.

Ashley Morton opened the piece with a lengthy solo that welcomed the audience into Ash with meditative pacing and luscious lines. Unhurried, she created a sense of  reverence for the body in motion and the stillness that surrounds it. Although the work had its fair share of legato movement (similar to Hobbs’ last work, the flowing Early), this piece also featured a rather quick section that required the finesse and sprightliness that his VMT training provides as a tool to the dancers. The speed of the second section was impressive, but I was more drawn to the way it contrasted with Hobbs’ slower choreography. I found myself gravitating towards the way the stillness and measured movements stood out against the rapid turning happening next to it. 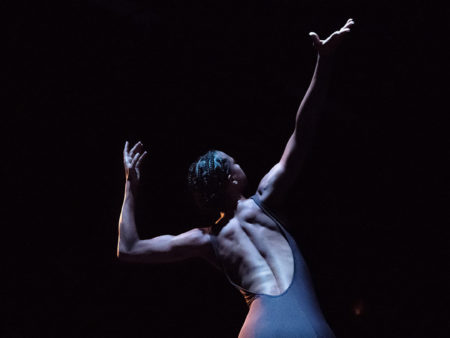 When Hobbs and I sat down to chat about the festival and his new work, he’d described a feeling he experienced earlier in the year, a sudden realization there was an upsurge in work being created locally. He described it as a wave that he felt the need to jump on and ride out. Union PDX was the product of that realization, as was Ash. In the same way that a wave of creativity was swelling in the city, Hobbs’ piece swelled in the beginning and the remainder was the ride, slowing in pace and force as the piece progressed. It ended with a quiet solo by Burns, who brought the piece to its close with the gentleness of a wave lapping on the shore. As the lights dimmed, I wondered why he’d chosen to end in such a way. But after thinking twice, I realized perhaps it was to allow for the stillness that comes inevitably before the next wave. For Hobbs, he’s hopeful that means a second annual Union PDX, and with it, another chance to unify the Portland dance community.